“Solidarity is beyond fraternity; fraternity is a mere human notion, while solidarity is a universal one.”, Victor Hugo, Philosophic Prose

As many Bulgarian villages Klisura (near SAMOKOV ) can’t provide access to drinking water during the whole year, especially during the summer months . SFB funded drilling in 2012 on top of the village to supply drinking water to the 200 inhabitants of this village. In Bulgaria , despite abundant water sources , many villages suffer from a lack of drinking water. The company waterworks area SOFIA sent technicians who have found a need for a settling tank before connecting the village network. On the occasion of their visit, they discovered near drilling a tank that had been built but abandoned before its commissioning ( at the fall of the communist regime ) . A whole rehabilitation will be required and a tender will be launched . SFB finance work or find partners to do so as it is quite unlikely that rehabilitation can be done without private funding.

SFB aims to cretae historical performances based on sound and light shows to showcase the Bulgarian heritage. Ultimately, the goal is to create local wealth (tourism, sustainable jobs ), but also to spread a message of confidence to the inhabitants of these areas.

This objective can be illustrated by the performance held in the fortress of Lovech in 2005 ( historical reconstruction of events that marked the glorious past of this place ), having met a great success.

SFB also wishes to support Roma populations , particularly through the education of young people. This objective is necessarily a long-term project as well.

SFB acts thanks to an alternative method of education , pedagogically adapted to Roma children, relying in particular on the “Frenet Method”: a participatory method that aims to make learning more motivating and accessible, already experienced within the Drita school ( Simeonovo , Sofia).

For the 10th consecutive year, students from the Ecole Centrale of Lyon engineers and EM Lyon business school have visited Bulgarian orphans , sacrificing the period of Christmas and New Year’s . They come in orphanages having prepared gifts and entertainment programs . They also prepare their action by collecting funds that will be able to improve the living conditions of these children. SFB works to ensure proper end-use of funds and ensure the sustainability of the contributions made by these generous actions. 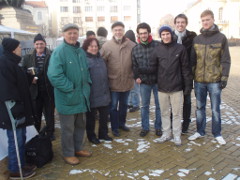 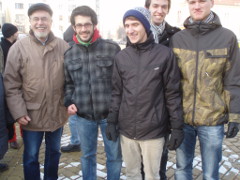 In addition to the mission realized on site during the holiday season 2012 by our friends from SOLIDARI’TERRE, our association monitors the use of the funds they collected prior to concrete actions in orphanages visited. In 2013 SOLIDARI’TERRE decided to allocate a budget to the improvement of living conditions of children in the orphanage HASKOVO .

Our association helped a Bulgarian who suffered cancer . The person died despite treatment. We help to realize her wish that the funds be allocated to support the children of Bulgaria who suffer the same illness.

In addition to the donation made by SOCIETE GENERALE Expressbank : 30 posts micro computer without screens, SFB has donated 1,700 euros which allowed our representative in Harmanlı, Ms. Nathalia Drehanova, to buy 20 monitors, one printer and one scanner . Our friends SOLIDARI’TERRE decided to join our project by buying 10 additional monitors in 2013.